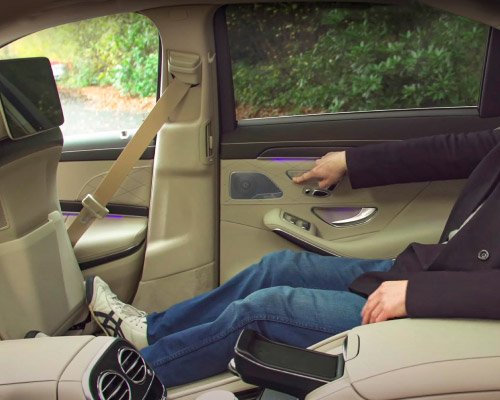 Sports utility vehicles are larger and are built on a truck chassis, which also gives them more weight. These vehicles can be great for towing, and many rank well for safety, too. SUVs are offered in small (or compact), midsize and larger options. Some buyers conflate crossovers with SUVs, although this body style is built on a standard car body (not a truck).

The best SUVs for drivers with long legs include:

The Suburban is arguably the largest SUV on the market. It offers three rows of seating and has a space for seven or eight (depending on the configuration). The model has a starting price of $54,700, which might not make it an option for more budget-conscious buyers. The Suburban also has a decent towing capacity—between 7,400 to 7,800 pounds. As it is a larger SUV, the Suburban doesn’t offer great fuel efficiency—14 MPG in the city and 20 MPG on the highway.

The Palisade is a large SUV with three rows of seating and room for up to seven. With a starting MSRP of $33,600, the Palisade is a mid-priced option for those who can’t splurge for the large Suburban. The Palisade also offers better fuel efficiency—26 MPG on the highway. It can tow up to 5,000 pounds. It received a Top Safety Pick+ award/rating from the Insurance Institute for Highway Safety (IIHS).

The Ford Bronco is offered in both a two-door and four-door option. The two-door Bronco has space for four, while the four-door Bronco can seat up to five. The Bronco starts at $30,800 and can tow between 3,340 and 4,500 pounds (depending on options). It gets 20 MPG in the city and 21 MPG on the highway.

The Lexus NX is a luxury SUV that starts at $39,425 and has space for up to five passengers. It’s considered a compact SUV and offers 41 MPG in the city and 37 MPG on the highway. The Lexus NX received a Top Safety Pick+ rating/award from IIHS.

The Bronco Sport is a bit more affordable than the standard Bronco; the Bronco Sport starts at $28,565. It has space for five and can tow up 2,000 to 2,200 pounds. It has decent fuel efficiency for an SUV and can get 25 MPG in the city and 28 MPG on the highway. The Ford Bronco Sport received a Top Safety Pick+ rating/award from IIHS.